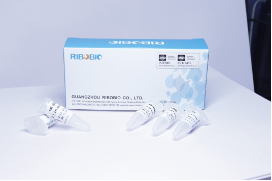 micrON™ miRNA agomir is a specially chemically modified miRNA agonist that functions by mimicking endogenous miRNAs into the miRISC complex to regulate the expression of target gene mRNA. Compared with the common miRNA mimic, miRNA agomir has higher stability and miRNA activity in animals, and is more easily enriched in target cells through cell membrane and tissue gap. It can be administered by systemic or local injection, and the effect can last as long as 6 weeks.

Refer to the table below to pick the right RNAi control for your research:

SMMC-7721 cells were subcutaneously transplanted into NOD-SCID mice, and the cholesterol-modified and Cy3 fluorescent-labeled miR-199a agomi was injected into the tail vein 2 weeks later, once every 3 days for 7 times. MicroPET/CT imaging was analyzed three weeks later and the results showed that [18F]FDG (fluorodeoxyglucose) absorbed by liver tumors was reduced after agomiR-199a treatment , that is, tumor growth was slowed down. (Zhang L, et al. EMBO J. 2015.) b.Injecting miR-125a agomir into the mice at a dose of 5 u mol/kg a day; 21 days later, stained the mouse spinal cord with HE and Luxol Fast Blue staining. The results showed that miR-125a agomir had improved CNS inflammation and myelin degeneration.( Happening. Pan W, et al. Nat commun, 2015.)